Universal Prayer of the Church

The Church prays seven time each day using the Psalms and Scripture readings.
These readings have been organised into whats called the Divine Office or the Liturgy of the Hours.
Recited at different times it helps us to focus on the presence of God in our daily life and gives a  rhythm to the day.
Reciting these Psalms at the applicable time connects you with the Church through the world.
Click on the button for the appropriate time to join in.

Recited at Dawn.
The night from six o’clock in the evening to six o’clock in the morning was divided into four watches or vigils of three hours each, the first, the second, the third, and the fourth vigil.
From the liturgical point of view and in its origin, the use of the term was very vague and elastic.
Generally it designated the nightly meetings,  of the Christians.
Under this form, the watch (Vigil) might be said to date back as early as the beginning of Christianity.
It could be on account of the secrecy of their meetings,
Click on the button below to join us. 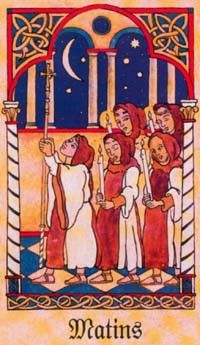 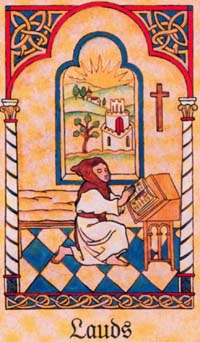 Laud, Latin for praise.
Early morning with its wonderful freshness and stillness is a time of day especially suited to the praise of God.
When Humanity and nature once again awaken and undergo their daily recognition of been a live, it is natural for humanity to rejoice anew in life and light and praise the creator of all things.
Click on the button below to join us.

Terce, the third of the seven canonical hours of the divine office, originally fixed at the third hour of the day, about 9 a.m.
The origin of Terce, like that of Sext and None, to which it bears a close relationship, dates back to Apostolic times.
According to an ancient custom of the Romans and Greeks, the day and night respectively were divided into four parts of about three hours each.
The second division of the day hours was that of Terce from nine o’clock until midday.
Click on the button below to join us. 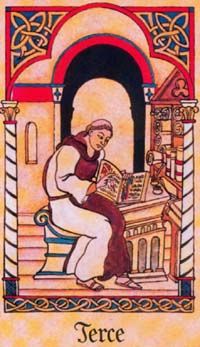 Sext, Noon.
The sexta of the Romans corresponded closely with our noon. Among the Jews it was already regarded, together with Terce and None, as an hour most favourable to prayer.
In the Acts of the Apostles we read that St. Peter went up to the higher parts of the house to pray .
It was the middle of the day, also the usual hour of rest, and in consequence for devout men, an occasion to pray to God, as were the morning and evening hours.
The Fathers of the Church dwell constantly on the symbolism of this hour.
Noon is the hour when the sun is at its full, it is the image of Divine splendour, the plenitude of God, the time of grace.
Click on the button below to join us.

None, Ninth.
According to an ancient Greek and Roman custom, the day was, like the night, divided into four parts, each consisting of three hours. As the last hour of each division gave its name to the respective quarter of the day, the third division (from 12 to about 3) was called the None (Latin nonus, nona, ninth). The following texts, express the importance of this hour: “Now Peter and John went up into the temple at the ninth hour of prayer” (Acts 3:1); “And Cornelius said: Four days ago, unto this hour, I was praying in my house, at the ninth hour, and behold a man stood before me” (Acts 10:30).
Click on the button below to join us. 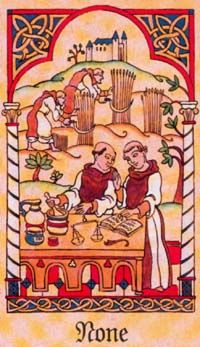 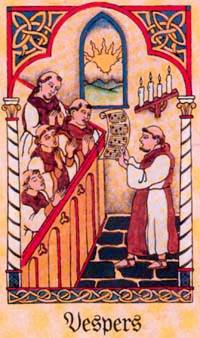 Vespers, the evening Star.
We can now see the great importance which the Church  attached always to the Office of Vespers.
It is the only one which has remained popular (excepting, of course, the Holy Sacrifice which we do not consider here as an Office) among pious Christians up to the present day.
Matins , on account of the hour at which they are celebrated, have always been more or less inaccessible to the faithful; likewise the little hours, except, perhaps, Terce, which serves as an introduction to the Mass.
Vespers, on the contrary, occupies a privileged place towards the end of the day.
click on the button below to join us.

Compline, complement.
The term Complin (Compline) is derived from the Latin completorium, complement, and has been given to this particular Hour because Complin is, as it were, the completion of all the Hours of the day: the close of the day.
Click on the button below to join us. 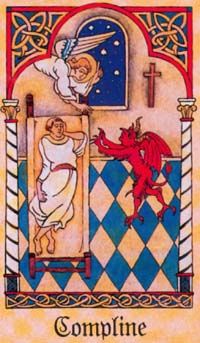